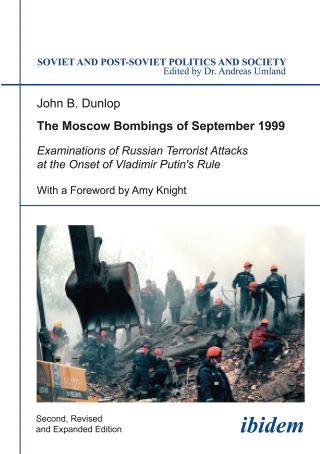 The Moscow Bombings of September 1999

The five chapters of this volume focus on the complex and tumultuous events occurring in Russia during the five months from May through September 1999. They sparked the Russian invasion of Chechnya on 1 October and vaulted a previously unknown former KGB agent into the post of Russian prime minister and, ultimately, president.

The five chapters are devoted to:  The intense political struggle taking place in Russia between May and August of 1999, culminating in an incursion by armed Islamic separatists into the Republic of Dagestan. Two Moscow terrorist bombings of 9 and 13 September 1999, claiming the lives of 224 Muscovites and preparing the psychological and political ground for a full-blown invasion of Chechnya. The so-called Ryazan Incident of 22 September 1999, when eyewitnesses observed officers of the FSB special forces placing a live bomb in the basement of an apartment building in the town of Rzayan. The detonation of a powerful truck bomb outside of an apartment house in Buinaksk, Dagestan, on 4 September 1999, which took the lives of fifty-eight innocent victims. The explosion on 16 September 1999 of a truck bomb in the city of Volgdonsk in southern Russia, which killed eighteen persons and seriously wounded eighty-nine